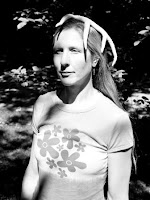 
Today my guest is the incredible Bonnie Jo Campbell. She is the author of Q Road, Women and Other Animals, the her newest collection AMERICAN SALVAGE has been nominated for the National Book Award

JG: It’s a real pleasure having you here today.

BJC: Well, thank you for inviting me. I didn’t know we’d be doing this interview on the Partridge Family bus. This is so wild. Look at these black lights and posters, and all this room to play Twister where the seats are taken out! Even the bathroom is lovely—and I never would have expected a bidet, and such a pretty one. Will the driver stop for cow sightings or pie shops?

JG: You’re an amazing writer. You have what I’d call a magical way of turning the horrific and profane into poetry. Some of your characters are so raw, touching the edge of villainous, but yet they’re lovable. How do you do it?

BJC: Thank you for your kind comments. I guess that your use of “horrific” and “profane” and “villainous” means you wouldn’t want to hang out with my characters. I’m always a little surprised that people think my characters are so bad. As human beings we are all capable of being both gracious and horrible (in fact, within the last 24 hours I have been both) and everywhere in between. I am interested in writing about characters who are in lousy situations, and so often they are stressed psychologically, physically, and financially, and desperate people don’t look quite so attractive as folks who are doing just fine. So I guess I see my characters as human, and I strive to find and show their humanity even when the characters are not looking or doing their best.

JG: In your newest collection, American Salvage, there’s a wonderful story entitled “The Inventor 1979” would you like to share the inspiration behind that piece?

BJC: That story was inspired by a neighborhood story. I grew up in the same house my mom grew up in, and when she was a kid, another neighbor kid drowned in the pond experimenting with his own scuba equipment. When I was young, a friend of mine got hit by a car on the way to school. She was walking with my brother, and she happened to be a niece of the boy who drowned. So I worked from there. Nothing much in the story is actually true, but it’s my pondering of old events that inspired to write what I did.

JG: Joyce Carol Oates described your characters in Women and Other Animals “as real as if perceiving them through an opened window.” You don’t actually spy on people, but how do you make them so real?

BJC: I make my characters real by BEING all my characters. By the time I’ve spent hundreds of hours writing the stories, I have thoroughly embodied the characters in those stories.

JG: From Women and Other Animals it’s a toss up for me, I love both “Shotgun Wedding” and “The Smallest Man in the World” what’s your favorite story in that collection?

BJC: I guess I don’t have a favorite story from that collection. Not sure why. I guess I love “Old Dogs,” but it’s a very sad story. I read it aloud once, and the room filled with despair. I think one poet in the audience was crying.

JG: From your website and from some of your stories I can see you love animals and especially gorillas. You know I have a penchant for our primate cousins too. How’d did your affinity for them come about?

BJC: I don’t know if I love gorillas, but I feel that I sometimes become a gorilla, and it’s possible that one day I won’t turn back into a human, so I need to keep friendly with the species.

JG: What are you reading now?

JG: I have to know what was going through your mind the day you got the National Book Award nomination. What were you doing at that moment? Did the announcement come in the mail, was it an email, a text message?

BJC: They called me one day in advance, and told me that I couldn’t tell anyone but my husband. I asked if I could tell the donkeys, and they said that was fine, but not the chickens. Chickens couldn’t be trusted to tell the secret.


JG:Besides American Salvage what other book deserves to win? Is that a leading a question?

BJC: I don’t buy hardcovers, and the finalists are all checked out the library, so I haven’t read the other books. I’m sure Jayne Anne Phillips is most worthy.

BJC: I write every day that I can, all mornings, and I’m sad when I can’t write. When life is richest, I can also grab a few evenings for writing, but that doesn’t happen very often.

JG: You have a pretty cool blog called Screen Porch Literary Adventures. How did it come about?

BJC: I have three blogs. The Screen Porch Literary Adventures blog was for writing about any time that three or more writers congregate on my screen porch. Lately my toilet has been screwing up so I haven’t been inviting anyone to sit and drink on my screen porch. I have to get that fixed. Its at http://screenporchlit.blogspot.com/
My regular writer blog is “The Bone-Eye” http://www.bone-eye.blogspot.com/
I also have an events blog, in case anyone wants to figure out where I’ll be: http://www.americansalvagestories.blogspot.com/

JG: What’s your next stop on the book tour?

BJC: I just got back from Ann Arbor, and next week I go to Elgin, Illinois, to visit Elgin Community College. They’re a great bunch there. They have a great writing program.

JG: You have this reputation for being one of the coolest writers and a bit of a party gal. I saw you once slap-boxing with the poet Kim Addonizio. Care to comment? What other things do you do for fun?

BJC: Oh, gosh, I’m normally a dullard, just sitting around and writing and reading. I do get lively when I’ve got a drink in me, and I remember my former life as wild woman and tour guide. Then anything can happen. I have my reputation to consider, so I won’t tell tales on myself.

JG: What’s your favorite place to hang out?

BJC: I really like to hang out in the donkey barn. The donkeys make a lot of sense to me. If I want to socialize with the humans, I go to Bell’s Brewery, also called Kalamazoo Brewing Company, downtown.

JG: Who are some of your influences as a writer?

BJC: I’d like to say Flannery O’Connor, William Faulkner, John Steinbeck. Realistically, though, I’m probably very much influenced by my mom, who tells outrageous stories about people stealing equipment from construction sites and dancing with lampshades on their heads. I’m also probably my old grandpa, who always started every one of his many stories, “It was kind of cute …” His stories established the basic humanity and commonality of all the folks in his stories.

JG: The word is you used to be a math professor. The only other mathlete writer I know of is Manil Suri. How did this switcheroo come about? Did you secretly always want to write?

BJC: I always wanted to write. I always wrote, but I wasn’t planning to put my eggs in the writing basket. I tried to resist. I was in a Mathematics PhD program. I was going to write my thesis on graph theory. And then I started weeping all the time. My PhD advisor, Dr. Art White, suggested I take a writing class. I took my Master’s Degree in math and jumped ship. I was hooked on fiction writing. I loved teaching mathematics, and I do miss that.

JG: What advice would you give young writers?

JG: Would you say you've had an a-ha moment as a writer?

BJC: When I suddenly realized that I should write about my own people, my tribe, I began to write a lot better.

JG: By the way, I love the souvenir tattoos for American Salvage. Did your publicist come up with that idea? How can I get one of those?

BJC: That was my idea. I wanted to have something fun for my book release party. I had matches for my second book, and also a local brewery brewed me a special beer. I’ll mail tattoos to anyone who wants them. I have thousands.

JG: I feel it’s my duty to ask you a question about the craft of literature. I know that sounds hokey but could you share with the readers a bit about the nuts and bolts of what you do. Like how long it takes you to write a solid draft? Do you work on multiple projects at once? I’m guessing because of your math background you’re analytical, but I may be wrong. Maybe your approach to writing is straight from the gut.

BJC: It takes me hundreds of hours to write a short story. A novel seems impossible, so I just keep plugging away without thinking about the time. I work on lots of projects at once. I don’t believe in writer’s block, though I can get tired of working on a given piece. I try to write from the gut, but that analytic mind sure is helpful in revision, which is ninety five percent of what I do. I write as best I can, and then I share my work with fellow writers, and I value their comments immensely.

JG: What are you working on now?

BJC: Lots of things. I wish I had eight hours a day to write. I’d spend two hours a day just on poetry. I’d write an essay every month. Really, though, I can find about three hours a day.

JG: What is the next project?

BJC: Hey, I love being on this crazy bus. Can you ask the driver to pull over so I can get out and take a photograph of that three-legged cow?
Posted by Paper Cut at 5:05 AM

Paper Cut
Before my words made it into print, I snapped the Eyesore of the Week for the Queens Ledger. That was pretty neat, but I was anxious to cover news and write stories. And soon I did. Since then, my writing has appeared in over 40 journals worldwide. I created the Nebilon Series, which is a collection of Fantasy/Adventure books. I am the author of the novels, The Acolyte And The Amulet, Quest For the Hope Box, Shades of Luz, and Disposable Heroes. My newest release is Book 2 of the Nebilon Series, Quest For The Hope Box. You don't need to buy it, but if you don't read it, you will be out of the loop. Currently, I am scratching away at Book 3 of the Nebilon Series. Hope to have it out by August 2021. Some of my other writing has appeared in The Missing Slate, New Pop Lit, Origami, Gravel, Octavius Magazine, Writer's Digest, Newtown Literary, Monkeybicycle, The Vehicle, The Main Street Rag, and Chicago Tribune's Printers Row. I earned my MFA in Creative Writing from Pacific University in Forest Grove, Oregon. I live with my family in Queens, NY. I love coffee, cats, and a good game of Mancala, preferably in the sand. 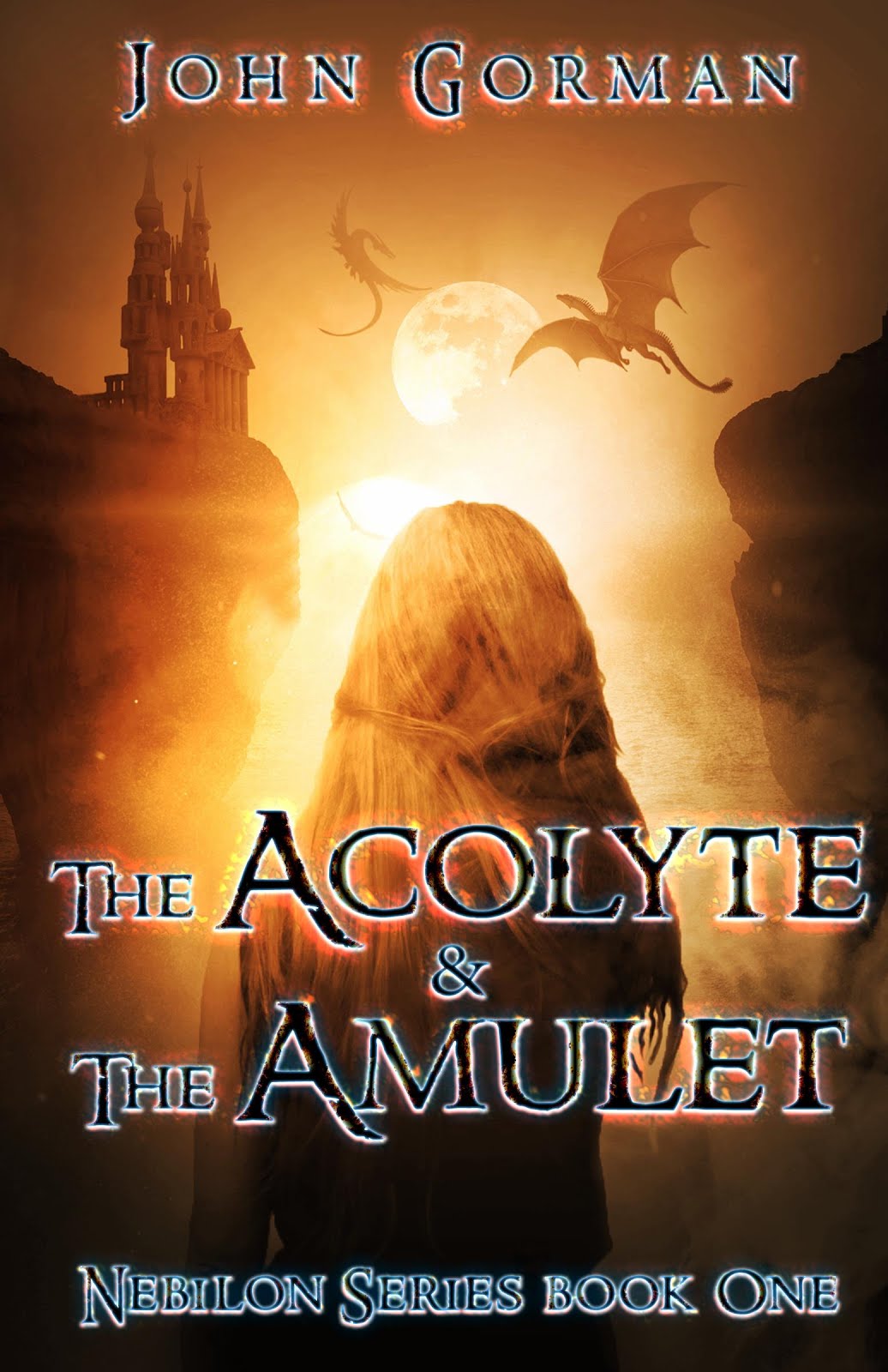